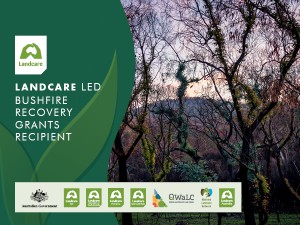 We received another  grant (July 2021), this time through Landcare, to expand our corridors project. It allowed us to provide more plants and fencing materials to landowners, hold further meetings, and purchase new equipment such as additional motion-sensing cameras. It also enabled us to extend the original concept of corridors connecting areas of open forest in the valleys to also providing food plants along riparian strips for frugivorous birds and fruitbats that need to move from the upland forests in lean seasons and when threatened by fires. Click here for an article about this.

We have now spent the entire grant, but that doesn’t mean the end of the corridors project.  We are continuing to conduct fauna surveys to compare in the future to investigate whether the project is actually increasing numbers and diversity of wildlife along the corridor routes.

A few years ago our main theme for the year was why animals need to move, . 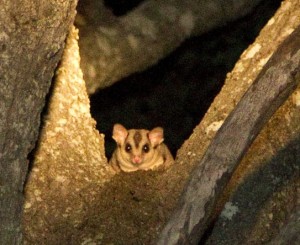 which includes aspects the animals are actively involved in seeking:

A few years ago Keith McCosh of Scenic Rim Regional Council suggested we search for squirrel gliders, which (unlike the the other gliders in our region) tend to be found in low-altitude open forests and woodlands.  Squirrel gliders are not yet threatened, but their habitat is not well protected by national parks or other conservation areas, and it is increasingly fragmented, making it difficult for gliders and other animals to move from one patch of habitat to another. We accordingly applied for and received grants, conducted quite a few surveys and mapped out areas where gliders were detected, and where corridors could be useful. 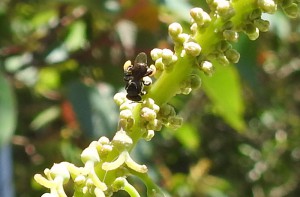 Although focussing on squirrel gliders, we want corridors to be as suitable as possible for other wildlife that use similar habitats, including:  koalas, bettongs, birds that need understory shrubs and are not strong flyers (e.g. fairy-wrens) or whose populations have been dwindling (glossy black cockatoos, grey-crowned babblers), lizards, native bees and butterflies.

Where are the present and future corridors? 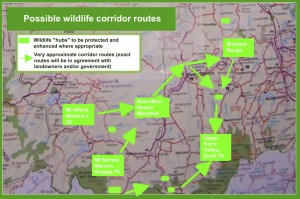 We developed a plan in cooperation with the Scenic Rim Regional Council. Our former environment officer, Keith McCosh recommended consolidating the “hubs” (Kooralbyn/Josephville, Mont Alford/Wallaces Creek, Birnham, lower Duck Creek, and Maroon/Mt Barney) as secure glider habitat as well as  establishing corridors.  Corridors will especially lead out from the Kooralbyn/Josephville area to other areas where they have been seen – especially south to the Maroon area, west to Boonah area and north to Birnham Range, and from there  via Kerry Road to Duck Creek Road, where there are good populations. [As Kooralbyn is more or less in the centre of some major corridors, we thought of this as a “hub” with radiating spokes (corridors) but have since been referring to all the large habitat remnants as hubs.]

A corridor through low-altitude areas nearer the NSW border is also being considered, as well as some connections between rainforest and riparian open forest, with some panting of fleshy-fruited rainforest trees and shrubs that are  known to grow naturaly in some valleys in the region.

Plantings and fence construction have been achieved on about 20 properties so far, and it is anticipated that glider poles will be used across some paddocks where plantings are not wanted, and that we will also be planting on Council land to fill some gaps.

The Communities Environment Program (federal government) also provided us a grant of $10,211 largely to provide fencing and other protection between plantings and grazing cattle and other animals.

We have now received a further $39,000 from Landcare to expand and extend our project, including corridors for rainforest birds (especially the critically endangered Coxen’s figparrot, but also bowerbirds, rifle birds and fruit doves and others) that move seasonally between highlands and valleys. Yes, they can fly, and some will readily fly over open paddocks, but others are hesitant to leave the shelter of the forest, and due to past clearing have little to eat in the valleys.

Plans for the hubs

Plans for the corridors 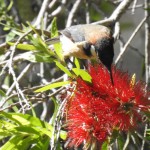 What we are planting and will continue to plant

A nice illustration of plants for native bees can be found here:  https://drive.google.com/file/d/13EkHtot5zo–KKMgCsK4SmtZyDbh7P3e/view?usp=drivesdk

Other factors we’ve considered in choices:

A call for volunteers 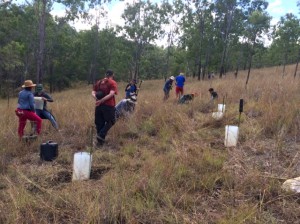 If you have not done so but are interested, please let us know if you can:

Please register your interest at https://cutt.ly/corridor

We have many people to thank.

Details of a 2019 wildlife corridors workshop can be viewed here.

Details of our workshop 8th February 2020, which was attended by about 40 delegates despite heavy rain, have largely been incorporated into the details on this page.

A thesis on effectiveness of corridors https://eprints.qut.edu.au/16039/

National wildlife corridors plan “The National Wildlife Corridors Plan is the Australian Government’s framework to retain, restore and manage ecological connections in the Australian landscape. It lays the foundation for a new, collaborative, whole-of-landscape approach to biodiversity conservation, one based on voluntary cooperation and the efforts of communities, landholders, governments and industry. The role of the Australian Government is to enable and coordinate the efforts of all participants. The Corridors Plan outlines the Australian Government’s vision whereby a diversity of land tenures and land use types will contribute to wildlife corridors. It is designed to guide and support individuals, private landholders and managers, community groups, policy makers, planners and natural resource managers to develop and manage corridor initiatives. The rights landholders have under the law to control and enjoy their property, control access to their property and legally dispose of their property in part or in whole are not altered or affected by the Corridors Plan.” https://www.environment.gov.au/topics/biodiversity/biodiversity-conservation/wildlife-corridors/what-are-wildlife-corridors

Review of corridors in logging areas in Australia https://www.publish.csiro.au/WR/WR9940323

A wildlife corridor along railway in Melbourne https://www.abc.net.au/gardening/factsheets/a-wildlife-corridor/9429290

“…The influence of landscape context on the bird assemblage increased as the surrounding land use became more intensive (e.g., woodland to native pasture to crop). Riparian zones have been shown to have consistently high biodiversity values relative to their extent. These findings suggest it is not enough to conserve riparian habitats alone, conservation and restoration plans must also take into consideration landscape context, particularly when that context is intensively used land.”

Summary: The following patterns of habitat use by birds were observed.(1) Most species were behavioural macrohabitat specialists, and suites of” suburb”,” forest” and” edge” species could be identified.(2) There was little movement of either forest or suburb species across the interface.(3) There was a strong edge effect, with a distinctive suite of large and aggressive species using the combination of resources that were available at the edge.(4) Forest species were characteristically small, foliage-feeding insectivores, and there was no effect of distance from the forest on the density of these birds within suburban sites.(5) There was no significant effect on forest species of varying the local vegetation characteristics within suburban sites, although there was some effect on suburb species. We conclude that day-to-day movements among small, isolated remnants are unlikely for most forest species; that narrow connecting corridors are likely to be dominated by aggressive edge species; and that this could inhibit movements within them by forest species. A loss of foliage-feeding avian insectivores could lead to further perturbations within corridor ecosystems, and these should be avoided by conserving wide corridors with a well-developed understorey.

If cities like New York can provide corridors for butterflies and bees, we certainly can! https://www.nytimes.com/2019/10/26/nyregion/green-roofs-nyc.html

Nation pollinator counts.  (We can incorporate this into our monitoring) https://wildpollinatorcount.com/resources/run-count/