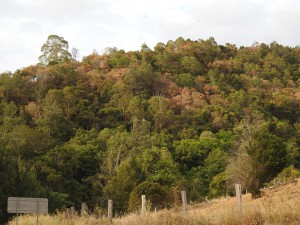 Trees dying on a forest slope, Running Creek, in late 20189, the hottest, driest year since accurate record started in 1910

The Scenic Rim branch of the Wildlife Preservation Society of Queensland recognises that the science of climate change predicts more frequent and more severe heatwaves and wide fluctuations in rainfall, leading in turn to more flooding, droughts and fires, and that much of what we are already seeing is very probably a start of this. Our wildlife, already challenged with much habitat loss, will be increasingly affected. The Scenic Rim branch, representing one of the most biodiverse regions of Australia, thus pledges to support mitigating action such as creation of movement corridors (needed in the short term for escape from fires and floods, and in the longterm for genetic diversity and movement to more suitable habitats as current habitat fragments alter) and political action to slow down carbon emissions (e.g. support for development of renewable energy and decrease in the use of fossil fuels). 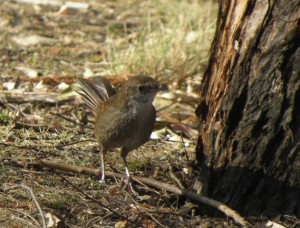 The critically-endangered northern race of the eastern bristlebird, with its main stronghold in the Scenic Rim, could be pushed to extinction by an increase in the frequency and severity of fires. Photo by Ronda Green.