Stay tuned!    More information and advice will be here soon

Most of the books mentioned here will be available at major bookshops, the Qld Museum and in libraries

A couple of very useful general books on our local wildlife:

Also visit iNaturalist for species that have so far been recorded in the Scenic Rim: this one is for Tamborine Mountain and this one of the entire Scenic Rim

You can also search the Atlas of Living Australia.  This one is focussed on Mt Chinghee, but you can adjust it for your own region 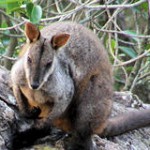 Mammals that are cat-sized or larger can usually be readily identified if seen clearly or good photographs are taken. Most of our mammals are nocturnal, which makes it more challenging, but with spotlights, binoculars, good telescopic lenses and motion-sensing cameras it’s certainly not impossible. Do make sure though that you don’t blind the animals by shining very bright lights directly into their eyes or taking flashlight photos from a close range.

Smaller mammals – with some exceptions – can be more difficult. Mouse-sized carnivorous marsupials, native and introduced rats and the many microbes species can be very difficult to identify without holding them or getting very good photos.

When viewing a mammal, try to see:

Some books that can assist are: 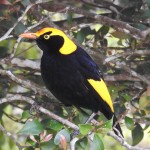 Birds are generally the easiest animals to identify.  Most are active during the day, there are several good field books, and most have calls that can be identified from recordings. Some birds stay mostly high n the trees, others near the ground, some in thick vegetation and others in open areas. A few are nocturnal.

Some useful books include:

Useful apps, which include calls as well as pictures and text, are:

Remember some birds have multiple calls, and a few can mimic each other 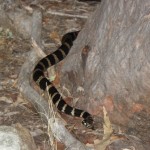 Reptiles can be very variable in colour. (Brown snakes can be various shades of brown, and other snakes species can also be brown. Green tree snakes can be bush or almost black, etc.).  Some venomous snakes can look very similar to harmless ones, so please don’t take any chances (and remember even non-venomous snakes such as carpet pythons can give a nasty bite, just as a cat or dog can do). 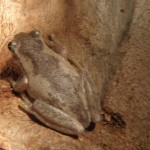 Frogs can also varying colour and (to a lesser extent) pattern. Eastern sedge frogs (small tree frogs often seen sitting on reeds and other foliage) may be bright green, brown, or a combination of green and brown,. All the frogs of our region (and there are about 40 of them)  belong to two families – tree frogs and southern frogs, both sharing common. ancestors with South American frogs, from our Gondwana heritage. Note whether their feet are webbed, and whether they have pads for climbing, whether the nose is pointed, whether it leaps en erratically, and any other detail you can record as well as taking a clear photo if possible.  Listening to and recording their calls is also very useful. Warm wet nights are usually the best time to find frogs. 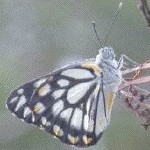 Remember all insects have 6 legs, at least as adults. A first step in identifying insects is to familiarise yourself with the various orders of insects: how can you tell if it is a bug (in the true sense) or a beetle?  A moth or a caddis fly? A bee or a fly?  The Zborowski and Storey book is a good start, and there area number of general insect books for both adults and children that explain the differences.

Do you know no one has died of spider bite in Australia for almost three decades, and that most spiders are totally harmless to humans? There are many weird, wonderful and beautiful spiders living around us.

Leiper, Glazebrook, Cox and Rathie. Mangroves to Mountains: a Field Guide to the Plants of southeast Queensland.

How to identify specimens

Nicholson, N and Nicholson, H. Australian rainforest plants Volumes 1-6 Terania Rainforest Publishing [a very handy series if you’d like to also flick through colour photos instead of working through keys, but don’t expect to find every possible species: it can be used in combination with the keys in the book above]

Mosses and other liverworts (Bryophytes) 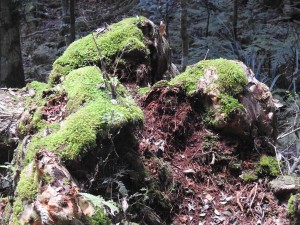 These represent some of the earliest land plants