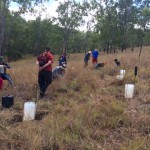 We have some wonderful national parks in our region but mostly in the higher altitude areas. There are some good wildlife “hubs”  catering for the lower, drier bushland species but much open land in between, and we’re trying to fill some of he gaps.

The Scenic Rim is a fertile, mountainous region of southeast Queensland with high biodiversity (one of the highest in Australia).

Volcanoes  erupted here more than 20 million years ago, providing basalts that weathered into nutrient-rich soil and high country that catches the rain as clouds sweep in from the Pacific Ocean.  They also provided the more resistant rhyolites, now exposed in dramatic cliffs and waterfalls In the lower valleys we walk instead over rocks formed in the days of the dinosaurs.

With such varied topography and soil, the region harbours quite a variety of vegetation types, providing habitat for a  diverse array of wildlife: several kinds of rainforest and eucalyptus forests, mallee heathland, other mountain heathlands, tea-tree wetlands, mountain streams with riparian forest, swamps and other wildlife habitats.

Several important conservation areas are within its boundaries, the largest being Lamington National Park (over 20,000 hectares).  Iconic species such as kangaroo, koala, platypus, kookaburra, wedge-tailed eagle and lyrebird live here as well as many lesser-known creatures, and some highly endangered ones such as the Coxen’s figparrot and the northern race of the eastern bristle bird (pictured above).

The Scenic Rim is part of the MacPherson-Macleay Overlap, a region spanning the coastal end of the Queensland-NSW border, long-recognised as a biodiversity hotspot, including a mingling of subtropical and temperate habitats where many northern species reach their southern limits and southern species their northern limits, as well as harbouring many species unique to the region.

Those of us who live in the Scenic Rim are very lucky to have such a wealth of wonderful, scenic places to explore or just relax in, and so many wildlife species living in our neighbourhood.

Our primary aims are to:

For an overview of the wildlife found in this region, please see https://scenicrim.wildlife.org.au/the-region-its-wildlife/wildlife-of-the-scenic-rim-overview/

(Don’t confuse us with Scenic Rim Wildlife Rescue, which is doing important work on rescuing, caring for and rehabilitating injured, orphaned and displaced animals. Our own focus is on conservation and education).